I’ve long thought that Athens (Greece) is a beautiful, multi-layered, culture-filled, vibrant city. Much of this love-affair with Athens begins in my youth and the excitement I found in the chaos and total madness of the city.

However, ever since I was very young, I imagined drawing lines across the concrete landscape of Athens to open up space for greener sights, better traffic flow and to improve the lives of its citizens (Christos at age 8 was full of dreams).

When you look at central Athens from a birds-eye view it’s hard not to compare it to the older quarters of Northern African cities (particularly in Morocco and Egypt), decaying, stagnant and packed.

Athens City urgently needs to be looked at, it needs a bold plan to rehome hundreds of thousands of Athenians, to create green space and improve the city’s infrastructure so that there may be place and space and opportunity for growth. Athens needs to grow, to have a future – and it needs to prepare for growth.

Here’s what I always thought of, briefly; obviously there are obstructions in place but – that’s the vision. 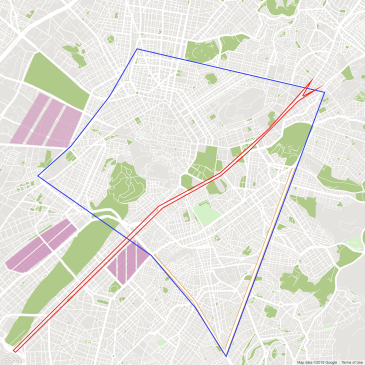 A large “Acropolis Park” from Philopappou Hill all the way to the new SNFCC designed by Renzo Piano to infuse the city with a large green space, to create new touristic places of interest, a tourist-friendly city, new spaces for Athenians and Oxygen production. (in green)

High Density Urban Zones with much larger, taller buildings of high quality, ready to house old and new residents and investor-friendly. (in pink)

Yes, I’m advocating for the destruction of much of the urban landscape to make space… But if we are to avoid Athens becoming a Medina-like city of uneven rooftops, satellite dishes, stray animals and poor opportunities for locals then we must reinvent the city to a scale that the founders of the city would be proud of.

And another visual afterthought