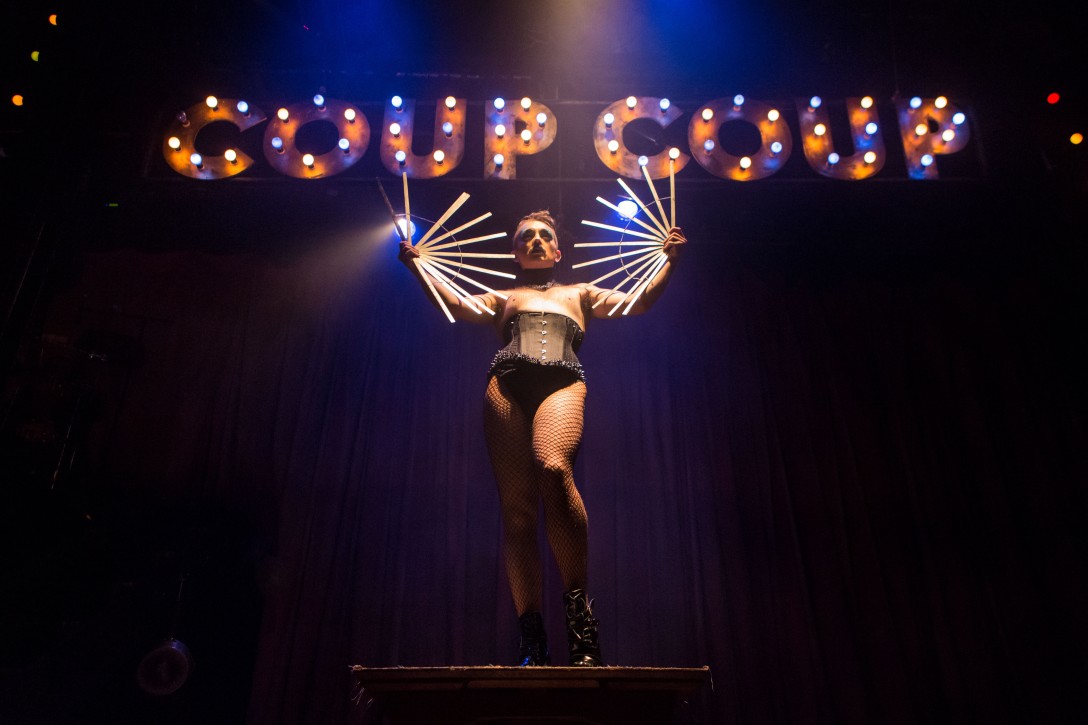 This political musical cabaret is a testament to why we still create theatre.

What makes this show brilliant is the combination of a strong concept and story, beautiful music, intelligent direction that absolutely owns its use of Brechtian devices and a fully engaged cast with an overflow of ensemble chemistry.

Let me take you to Studio 1 at the Arcola for a moment (and we must thank the Arcola for hosting such beautiful and daring work) or in fact into the aptly named COUP COUP cabaret.

Before the play even begins we are greeted by the flamboyant and flirty Alexander Luttley, dressed in a low-corset and blue feather wings (he plays Wing Commander Campos) and the band, made up of Eilon Morris, Rosalina Ford, Anne Marie Piazza and Josh Sneesby. Later on these same actors will, under different devices end up playing everything and anything from CIA Agents to crying mothers.

Soon enough the first half begins – Rob Castell, in a fascinating performance, plays a General who won’t run out of energy until the very very end of the second half, where (brilliantly) he is allowed to explain himself and his actions. (And he sings “I’d do it all again” to a frozen audience).

The first half is a wonderful cabaret number with live audience interaction, blending the lines of who is part of the show and who isn’t (no spoilers), under the wings of a charismatic performance by Neil Kelso as Sub Lieutenant Suarez we are all invited to a little game of hypnosis, we play games (yes all together) and finally – the disappearing act. Wonderful, fun, laughs, magic – we applaud.

The second half is an altered repeat of the first half, only this time, it’s not fun, we are not involved (only passively accepting the events that unfold in front of us, and that’s the point!), a mother looks for her daughter, abductions and disappearances are not fun anymore, the same tunes that sounded gorgeous in the first half now make you wonder how much we can hide in plain sight and how easy it is to package everything in labels for “country’s sake”.

In the relationship between mother (Ellen O’Grady) and daughter (Charlotte Worthing) and later granddaughter (Anne-Marie Piazza) we are reminded of why it’s important to stand up for our beliefs, for our values, against injustice, against corruption – again in a genius way, as they tell each other (and it’s beautiful and moving to see these women, in different generations of their lives in the play, show empathy and passion for the world around them).

I can’t stress enough that the set is a simple masterpiece, including the white boxes (no spoilers), the lights are impeccably choreographed and the entire ensemble gives it its all, commits when the situation requires it and enjoys itself when they are presenting the cabaret and/or playing their live music.

I’m going to stop myself from telling you more about the show. I’m going to end with: it’s brilliant, it’s necessary, be prepared to have fun, and without being offended, you’ll be shown just how much we let happen every day when we don’t raise our voices.

When the curtains open, the show ends. It stays with you.

Thank you to all cast, creatives and production team for making this show.

P.S / Buy a programme, Amy has written a short introduction about the origins of the piece – those motivations to tell such a story, is why we still do theatre.

Below the music by Darren Clark. Which you can also purchase here: http://www.darrenclarkmusic.co.uk/cast-recordings.html